If you are not sure what trout eat then you might have some difficulty catching one. Trout are catholic feeders and will eat just about anything smaller than itself. There are literally millions of species of insects and at some point or other trout will have devoured many of them. The good news is we don't have to copy all these insects to catch fish and this basic entomology page will arm you well enough to make good judgements about what the trout are feeding on and to tie on a suitable fly pattern to deceive the trout.

Although there are millions of insects in fly fishing we are generally more concerned with aquatic insects which actually live in the river for most of their lives. Fortunately from our fly fishing perspective there are only 4 main types, that as both adults (flies on the surface of the water or on surrounding vegetation/rocks) and in their larval forms living in the sediment and gravel of the river, are easy to identify. In fly fishing we imitate these “in” river larval forms of insect with a nymph or wet fly (an artificial fly that sinks). Larval forms of insect that live in the river are also referred to as nymphs. Adult surface insects are copied with dry flies (that float). When fly fisherman go fly fishing 80% of the time they are using an artificial fly that copies or imitates one of these 4 types of insect. In order of importance from the fly fisherman’s perspective they are;

On the river the duns (pre-adult stage) of these insects are unmistakable. They look like little sailboats floating happily downstream. They are an ancient order of insects and there are hundreds of species that vary in size form a few mm to the actual mayfly itself (Emphemeralla danica) which is up to 5 cm long. Trout like to eat most species of mayfly. Mayfly often hatch (emerge from the water) from the middle of the day onwards and often in large enough numbers to cause a rise. A rise is basically how fly fishers describe surface feeding trout. In order to catch these trout a dry fly that matches the natural insect is used and we will see more on that in the next link.

Although mayflies are regarded as the most important aquatic insect by fisherman if the trout had a vote they would say caddis are the most important. The adult fly is easily identified with its tent shaped wings.

Midges are generally very small flies and in years gone by were largely ignored by river fly fisherman who fished fast flowing alpine style streams.  Larger items and specifically mayfly and caddis flies are generally more imitated to this day by hundreds of fly patterns. However midges also known as Buzzers/chironomids are important items on the trout’s menu although this importance has much to do with location in the river.

The importance of midge to the typical river fly fisher is often misunderstood.  If trout become selective during a midge hatch then only a midge pattern will work.  The Griffiths gnat is a perfect dry fly when trout and grayling take midge at the surface of rivers. 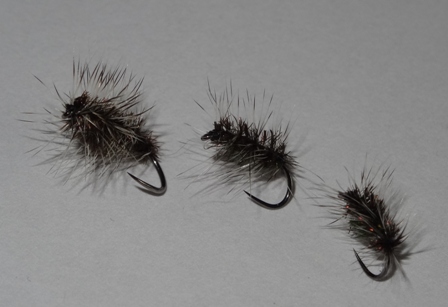